Digging into MLS salary numbers is a bit like knowing I’ll get a hangover, but opening that next bottle of wine anyway.   The problem is, understanding the salary cap and restrictions are core to understanding the league.

The hardest part of finishing up this series of around building an MLS roster for one million dollars in total compensation is that there are so many interesting ideas to follow up with that it’s hard to keep focused on a few key points.

But let’s give it a try…

First, I wanted to point out that my use of total compensation rather than base salary information exaggerated the challenge, since base salaries are more relevant for the MLS salary cap, which is currently around $2.5 Million for a full roster.

However, at worst, it made the challenge more difficult.   When using the more salary-cap-relevant base salary information, the team I picked would have cost $844,960 in base 2010 salary.  This means that the team, which I still think would be competitive in MLS, would only be one third of a typical MLS club’s budget.

It’s also worth pointing out that in creating this exercise, I’m dealing in a completely implausible world where I can sift through league rosters and choose whoever I want.  No front-office in the league has ever been offered such a luxury.  Even expansion teams are only able to pick from non-protected players – where smart teams weed out the best bargains before the draft.

One of the biggest considerations in my view, was how to achieve the best team balance.   Anyone familiar with MLS can recall an exciting passing sequence, or especially creative move, that is immediately followed by a missed trap of the most basic variety that sees the ball go out of bounds.

Is there anything more frustrating?

This is one area that seems to be a particular struggle for MLS teams like my local New England Revolution.   I ran some numbers to compare the roster I picked for that million dollars to the roster the Revolution fielded against Philadelphia that same weekend I was in the middle of my salary number crunching.

In that game, the Revs lineup was $300K-plus more than my selected team, and they were without an otherwise obvious starter of Matt Reis, who would have added another $100K+ to the starting eleven.

This picture is a graph that plots the salaries of my lesser-paid starting eleven versus the Revolution starting eleven for that game.  (The picture sorts from low-to-high based on base 2010 salary.) 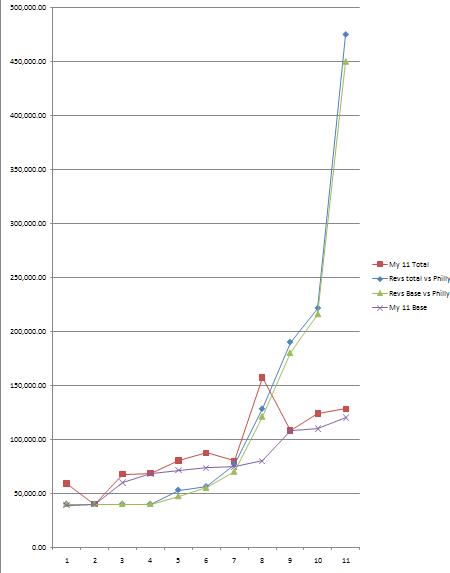 What’s more interesting is that even with the higher overall salary value, for that game, if you were to pile all the players into a single group  (the Revs starting eleven plus my choices) of 22 players, six of the lowest seven base salaries would have been Revolution players, as would six of the bottom nine based on total compensation.

To further illustrate the current Revolution challenge, here’s a chart of the base and total compensation of all 2010 Revolution players, including those dropped and added mid-season. 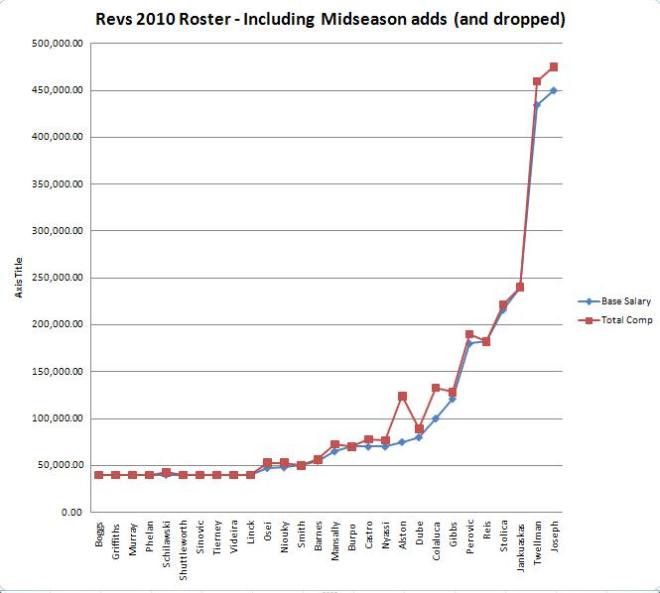 Anyone who tracks the Revolution does not need to have it emphasized that two of the three players that constitute that “hockey stick” rise in salaries are not on the field in 2010 (Twellman, Jankauskas) – totally slamming any sense of balance in our lineup. However, there is a crowd of “barely paid” professionals at the other end of the spectrum that see plenty of action.

To me this illustrates the extreme importance of placing winning bets with highly paid players, and perhaps the greater importance of spreading the wealth to solid players across the lineup.

What becomes clear is that, despite having positioned the lack of an aggressive pursuit of a Designated Player on the idea that it might unbalance the Revolution’s history of a solid lineup and cohesive locker room, the team is already very unbalanced.

Despite the fact that MLS slush-funds for salary cap use (aka, allocation money) blurs things, it still appears that the Revolution have the two most expensive non-DP’s in the league – Taylor Twellman and Shalrie Joseph.

It’s not the team’s fault that Twellman’s injury took him out for the year, but not being more aggressive with a creative answer to that major salary commitment is something they should answer for.  (If he barely played last year, why risk such a huge investment in the roster all year?  Was there no creative option left?)

Shalrie Joseph remains one of the league’s top midfielders, but has had (for his standards) an up and down year, further marred by a league suspension for substance abuse issues (however minor some might argue they may have been.)   That didn’t help the “marketability” of him to an already reticent fan base.

Add to those issues a non-playing third most costly player and one of the league’s most expensive goalkeepers and you end up with the worst-case scenario of an unbalanced team, where your biggest investments do not make a difference in the quality of play or team marketability.

The Revolution will never need to play my bargain basement top eleven, but I sure do wonder how that game have ended.   If team balance is truly important for MLS success, which I suggest it is, someone needs to ask if the Revolution were ever really structured for success in 2010.